Six Al-Shabaab camps have been destroyed in the past two months and an assortment of weapons recovered during the ongoing 'Operation Linda Boni'.

Police spokesman, Mr Charles Owino, advised citizens to be extra vigilant as new intelligence reports indicated that the militants have sneaked into the towns of Mandera, Garissa and Wajir.

"Following sustained pressure by our gallant soldiers in Somalia, we have intelligence that they are sneaking into our northern towns."
"We urge Kenyans at large to be alert and identify strangers moving into their villages and towns and report them to the police or any security agency," added Mr Owino.


He said destruction of the camps was a big step in the war against terrorism. 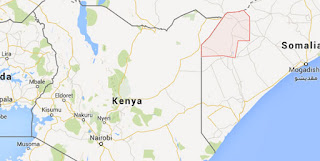 Posted by JihadTracking at 7:50 PM No comments: Links to this post

Compilation Of Battles In Syria On November 20th

Posted by JihadTracking at 11:54 AM No comments: Links to this post

Global Terror By The Numbers

Posted by JihadTracking at 11:22 AM No comments: Links to this post